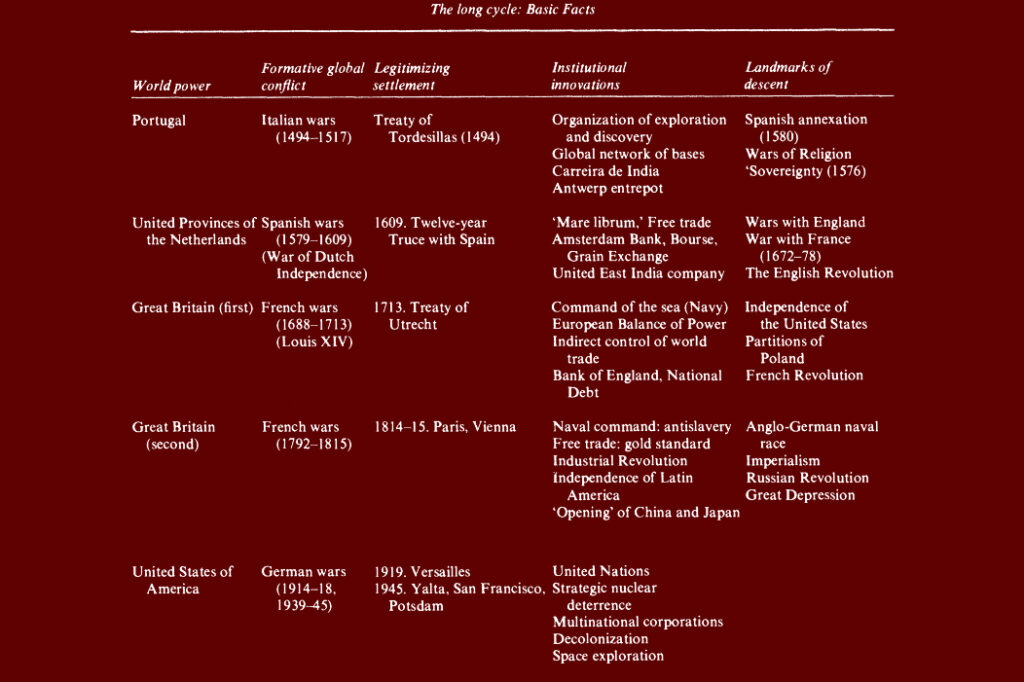 Image: Table 1 from The Long Cycle of Global Politics and the Nation-state in the journal Comparative Studies in Society and History, by George Modelski. Cambridge University Press, 1978.

1. In 133 BC, the Ancient Greek historian Polybius described an internal revolutionary sequence that proceeded as follows: one ruler, a few rulers, many rulers, chaos, one ruler, and so on.

2. In the 1970s, political scientist George Modelski described a global war sequence that proceeded as follows: one hegemon state, a few states competing for power, war, settlement, one hegemon, and so on.

3. The Russian Invasion of Ukraine requires that we give consideration to George Modelski’s anacyclic War Cycle, which by his reckoning puts us on track for the Fifth World War since the Age of Discovery.

Here at the Anacyclosis Institute, we are all about historical cycle theories.

To be clear, we don’t think that history adheres to any rigid sequence, and we don’t subscribe to notions of irrevocable destiny. What we do believe is that human dispositions and behavior are sufficiently uniform and predictable to enable us to resolve the infinite variations of human existence into a finite number of patterns.

We’re not alone. Plato, Polybius, and John Adams are all with us, even if the bulk of mainstream historians are not. And today, compelled by the ongoing Russian invasion of Ukraine amidst a destabilizing global order, we will feature another advocate of cyclical historical theories: George Modelski, the late Polish-born American political scientist.

In 1978, George Modelski wrote The Long Cycle of Global Politics and the Nation-state in the journal Comparative Studies in Society and History. In this article, Modelski described an anacyclic war cycle that has completed four full sequences since the commencement of the Age of Discovery, going on five. By his reckoning, we’re not approaching World War III. We’re approaching World War V.

We will consider Modelski’s War Cycle in greater detail below after recapping the Polybian Ancyclosis. Suffice it to say though, that whereas the Polybian Anacyclosis describes an internal revolutionary sequence within a political entity, the Modelski War Cycle describes an external conflict sequence occurring among political entities. Indeed, as we shall see, the basic stages of Modelski’s War Cycle are similar enough for us to characterize his sequence as “Anacyclosis for nation-states”.

According to F. W. Walbank, the great historian of Polybius, the description of Anacyclosis assumed its final form in or about 133 BC. As mentioned in this prior blog post there’s some question of who ultimately deserves the credit for the idea. Dicaerchus of Messana, Panaetius of Rhodes, and Plato all likely shaped Polybius’ thinking on the matter, as did the Gracchan revolution. In any event, Polybius gets the credit for Anacyclosis in the form that it has descended to us in Book VI of the Histories.

The Polybian Anacyclosis is fundamentally a description of internal political evolution within a political system. In simple terms, according to the Polybian account, political society begins in tribal chiefdom. Eventually, these tribes will coalesce into a primitive kingdom, elevating one chief to the kingship. The descendants of this king will degenerate into corruption or idiocy, transforming kingship into tyranny. Eventually, the state’s leading men will no longer tolerate the tyrant’s abuses, and the monarchy will be eclipsed by an aristocracy. But the descendants of the aristocrats will in turn degenerate into corruption, turning aristocracy into oligarchy. In time, the people will grow weary of the abuses of oligarchy, and take matters into their own hands, establishing democracy. Yet just as all rulers which have preceded them, their descendants will also become corrupt and degenerate, and the democracy will decline into ochlocracy, or mob-rule. In the ensuing chaos, the people will seek refuge in the domination of a single leader. As Polybius puts it, political society will ultimately return to its originating condition of monarchy, for the people will

Degenerate again into perfect savages and find once more a master and monarch.

In describing the final stages of Anacyclosis, Polybius nevertheless does allude to a necessary precondition vis-à-vis the international order: stability against external threats. Polybius acknowledges this in the beginning of this paragraph below:

When a state has weathered many great perils and subsequently attains to supremacy and uncontested sovereignty, it is evident that under the influence of long established prosperity, life will become more extravagant and the citizens more fierce in their rivalry regarding office and other objects than they ought to be. As these defects go on increasing, the beginning of the change for the worse will be due to love of office and the disgrace entailed by obscurity, as well as to extravagance and purse-proud display; and for this change the populace will be responsible when on the one hand they think they have a grievance against certain people who have shown themselves grasping, and when, on the other hand, they are puffed up by the flattery of others who aspire to office. For now, stirred to fury and swayed by passion in all their counsels, they will no longer consent to obey or even to be the equals of the ruling caste, but will demand the lion’s share for themselves. When this happens, the state will change its name to the finest sounding of all, freedom and democracy, but will change its nature to the worst thing of all, mob-rule.

Those who have followed us will be familiar with the gist of Anacyclosis. And, notwithstanding the various refinements we’ve suggested to both the sequence and the theory of Anacyclosis throughout over the years, the essential Polybian sequence remains one ruler-few rulers-many rulers-chaos-one ruler.

As noted above, the Polybian sequence of Anacyclosis describes an internal revolutionary process pursuant to which a stable political society advances through stages of one ruler, to a few rulers, to many rulers, to political chaos (civil unrest and civil war) back to one ruler. One-few-many-chaos-one. Hold that thought.

Modelski’s War Cycle posits a process that will not look dissimilar to those who are familiar with Anacyclosis. According to Modelski’s sequence, one nation state will achieve hegemony, as the outcome of a world war. Eventually, a few nations will compete for regional or global power. The unipolar global order will thus become destabilized by a few powers competing for power. This competition eventually results in another world war. That world war will be settled by some treaty or settlement, which will recognize and establish a dominant hegemon. And this sequence will begin anew.

Modelski invoked this idea in his account of the War Cycle:

One generation builds, the next consolidates and the third loses control.

As Modelski summarizes the phases of the War Cycle sequence:

The long cycle will be divided into two phases: the ascending phase and the descending phase. The ascending phase has its sources in the disorder and disintegration from which a global war originates. The creative and constructive elements of that war – its solidarity and coalition building, the definition of common goals and global purposes that emerges and its projects and accomplishments in goal attainment – also belong to the ascending phase.

A great postwar settlement (such as Vienna) for the most part ratifies what has already happened, but it also marks the formal ending of a period of sustained warfare. The ascending phase continues for a time, on past record for a generation, only to experience a gradual exhaustion of energy. Global problems arise that remain unattended to or are taken up by rising new leaders and competitors; conflicts are generated that do not seem to yield to solutions. At some point the curve turns and begins to descend until such time as the disintegration of authority and the unrestrained assertion of narrow interests lead to a new global conflagration. The destructive aspects of this process mark the lowest point of a long descending phase.

In describing the rising competition from a few regional states jockeying for power, Modelski continues:

As the monopoly position of the global power gradually erodes, competition sets in from other nation-states for global status and regional leadership (for are they too not nation states, with as much right …).

According to Modelski, this sequence has run its full course not once, not twice, not thrice, but four times since 1494. Each sequence averaged around 100 years.

Modelski’s paper provides a useful chart, outlining the dominant hegemon, the applicable war and settlement, contemporary institutional innovations, and the landmarks of descent which foreshadowed the coming conflicts. The chart is reproduced below (credit, Cambridge University Press, 1978). 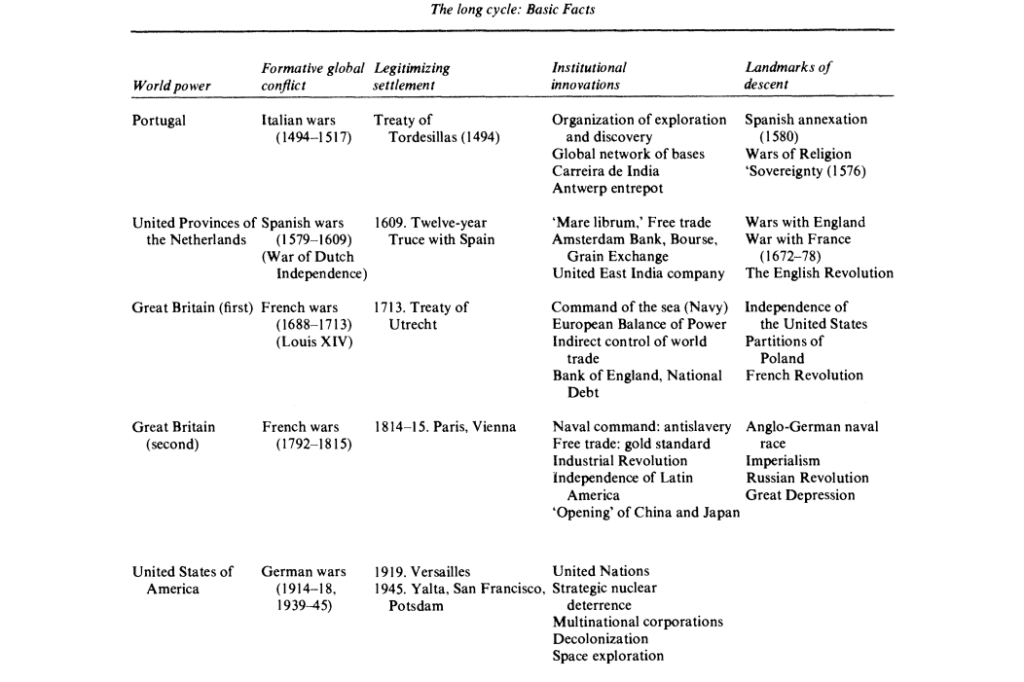 The analysis above is not to suggest that the world is actually approaching another world war, and certainly not to advocate that it should or that another world war is inevitable. It is to call attention to the remarkable similarity in the overarching structures of the Polybian Anacyclosis and the Modelski War Cycle.

Moreover, it is to call attention to Modelski’s War Cycle in its own right, particularly in view of Russia’s invasion of Ukraine, which commenced not even a week before this writing. If this chart holds water, we should all be very concerned. Because if Modelski’s chart does hold water, it might be time to start filling out the bottom right-hand cell.

The Greatest Story Never Told By Hollywood: Episode III: The Plutocracy Strikes Back