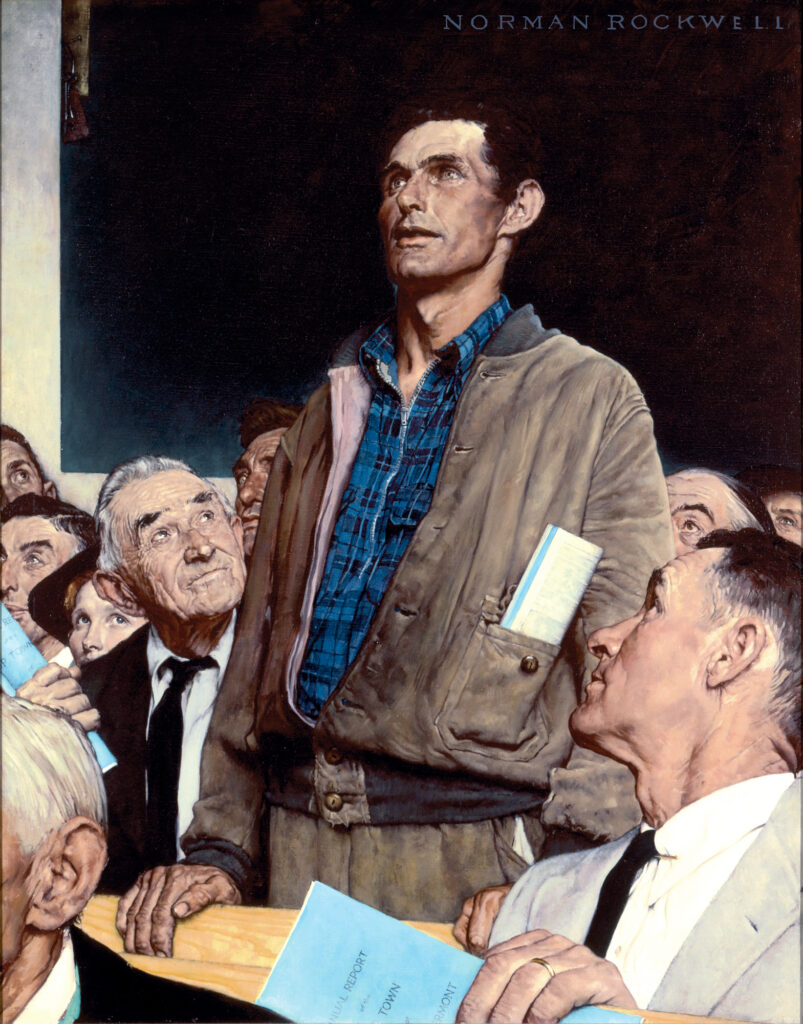 1. At the start of the Revolution, America’s middle and northern colonies were the most egalitarian societies on Planet Earth.

2. In order for America to have an authentic democracy, we must restore a financially independent and productive middle class.

3. Instead of “trickle-down” or “bottom-up” approaches we could benchmark the economy against the median household net worth.

Before the Revolution, John Adams condemned extreme wealth concentration: “Property monopolized, or in the Possession of a Few is a Curse to Mankind. We should preserve not an Absolute Equality – this is unnecessary, but preserve all from extreme Poverty, and all others from extravagant Riches.”

After the Revolution, Thomas Jefferson condemned extreme inequality: “I am conscious that an equal division of property is impracticable. But the consequences of this enormous inequality producing so much misery to the bulk of mankind, legislators cannot invent too many devices for subdividing property.”

The next generation attested to America’s middling status. Alexis de Tocqueville described equality as America’s defining characteristic: “Amongst the novel objects that attracted my attention during my stay in the United States, nothing struck me more forcibly than the general equality of conditions.”

Modern research confirms America’s egalitarian origins. Peter Lindert and Jeffrey Williamson concluded that on the eve of the Revolution, “New England and the Middle Colonies appear to have been more egalitarian than anywhere else in the measurable world.”

But the middle class is not only about size or virtue. It is also about power. Liberty is not derived from the theoretical ability to give consent. Liberty is rooted in the actual power to withhold consent. Ancient democracy was based on fear of military labor strikes. American democracy was born of a tax revolt.

It is thus not enough that the middle class be substantial or virtuous. In order to maintain democracy, the middle class must also be financially independent. Without independence, people must rely on patronage to survive. Wards and dependents cannot strike, sustain revolts, or guarantee redress of grievances. A dependent lower class cannot maintain democracy any more than a kindergarten class. Even an informed citizenry is impotent without independence.

Modern scholars, particularly Martin Seymour Lipset and Barrington Moore, have confirmed the connection between democracy and the middle class. Unfortunately, modern scholarship also confirms the decline of the middle class. Neither our government nor researchers have settled on a standard definition of “middle class”. But the Gini index shows plainly enough that America was more egalitarian in 1776 than it is in 2020. The byproduct of this extreme inequality is extreme precarity. Today, roughly half of Americans live paycheck to paycheck. Household precarity, in turn, produces household dependency.

And all this was before the ongoing Covid19 pandemic devastated the economy. Even before the pandemic, however, the American middle class faced other looming threats, the dimensions of which have not yet been fully apprehended: the impact of job-destroying and labor-saving technology, alongside the proliferation of the gig economy. Add these factors to various conventional grievances such as immigration, outsourcing, debt, inflation, and taxation, and the American middle class is being pummeled from all sides.

So, how do we restore the middle class?

Republicans advocate deregulation and tax reform, citing the golden age when America enjoyed seemingly unlimited productivity and job creation. These were great ideas, but for a different time. American corporations are no longer American, but global. They now have foreign supply chains and workforces. Furthermore, they have foreign owners and answer to foreign interests. When unregulated, multinational corporations sell out American workers to the lowest foreign bidder to make an extra dime. Laissez faire isn’t a solution, it’s carte blanche to undercut American workers. The last fifty years of unrestrained capitalism is transforming America into a place that resembles the stratified aristocracies of old Europe more than the hopeful egalitarian Republic which our Founding Fathers established.

Democrats advocate progressive taxation combined with various subsidies to provide immediate relief to struggling households. These are also great ideas, but only for a short time. While subsidies mitigate household precarity, they also aggravate household dependency and undermine productivity. This is not just theory. History’s only other superpower republic – Ancient Rome – never regained its middle class after making its grain dole permanent. Even though Tiberius Gracchus got many smallhold farmers back on the land, many did not take so well to hard work. Rome learned the hard way that you cannot restore a productive and independent middle class with subsidies, and that the middling virtues are not quickly revived.

Despite Rome’s example, however, no truly democratic people want to be precarious or dependent upon subsidies. While anyone in a free country may need a helping hand from time to time, no one saved from rough seas wants to carry their life raft around with them forever.

Therefore, rather than “trickle-down” or “bottom-up” economics, if what we care about is the middle class, shouldn’t we benchmark the economy against the median?

To accomplish this, we could tether the outcomes of the top households to those of the median households. Going forward, we could – with a slight adjustment to the tax code – cap household net worth at some reasonable multiple of the median net worth (but not tax existing wealth). Thereafter, the very top would enjoy further financial gain only when the median gains. The rationale for this is that when the top is anchored to the median, all energies of pecuniary minds must refocus on the common goal of increasing the median. This approach would align the interests of the billionaire class to the middle class.

Assuming the largest fortune in 1776 was roughly 1,000x the median household net worth (my own rough extrapolation, this number needs to be confirmed) a multiple of 10,000x (roughly $1 billion today) seems a reasonable place to start the discussion. There are of course arguments for a higher ratio. There are also arguments for a lower ratio. What do you think the ratio should be?

In restoring the middle class and social mobility, this approach would be more universal and effective in the long-term than a thousand socialist band-aids. Unlike policies which target only one aspect of economic activity, a policy benchmarked against the median household net worth cannot be evaded or manipulated because the calculation of net worth factors the cumulative effects of all economic activity. Every pay cut, tax hike, price increase, hidden cost, layoff, job outsourced, debt, foreclosure, benefit reduction, pay disparity, and machine and algorithm which reduces the wages of a flesh-and-blood American worker – in other words, all forces depressing the median – are computed by the median net worth.

By contrast, any policy that targets only one of these factors, for example a policy to establish a minimum wage, does nothing to address any of the other factors noted above like taxes. $15.00 an hour does not protect workers from benefit reductions, outsourcing, immigrants, or job-destroying technology. Deploying corporate managers to increase the median household net worth does.

To avoid further dependency on subsidies, we could use the proceeds of this new tax (which we could name the Patriot Tax) only for appropriations which inure only to the general interest and to no special interest; e.g. veterans’ benefits, infrastructure, national security, social security.

Enforced with discipline, this approach would rehabilitate an independent middle class, restore by law the modesty and moderation that once prevailed by custom, and promote America’s independence. All with no new subsidies, corporate taxes, or business regulations. It will not happen overnight, but neither Rome nor America was built in a day.

To restore our independent middle class, we cannot trust to unfettered capitalism or indefinite socialism. We must acknowledge that the fleecing of the American middle class over the past half century – under both parties – has left millions precarious, dependent, and in need in immediate relief. But if we value authenticity in our democracy, productivity in our citizens, and independence for our nation, we must tame both socialism and capitalism with a new and sustainable theory of political economy. Because it advocates the enforcement of ratios to prescribed economic activity, may call this new theory Rationism.

It’s very simple, if we want greater wealth equity, we have to get back to a solid currency anyone with resource can create. The answer is Hydrogen Economics where everyone can create fuel for use and sale into a currency market. Basically an egalitarian version of the Petrodollar.
H2space.org

Anacyclosis, Act 1: From Monarchy to Tyranny