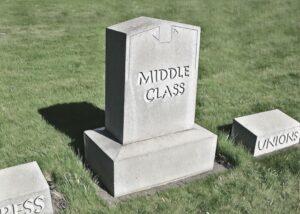 One of the few remaining issues today that people across the political spectrum agree on is that the middle class is in big trouble. Sadly, this admission of the problem is where the agreement stops. There is no consensus surrounding how to go about fixing it.

One potential reason for this is that there is no standard or accepted definition for what the middle class is. Astonishingly, the United States Census Bureau does not have an official definition of middle class. The Federal Reserve does not either, though it acknowledges that the American middle class is in trouble in its research, its press releases, and speeches. Two years ago, the Brookings Institution compiled and presented 12 different quantitative definitions of the middle class from prestigious research groups and financial organizations. These definitions ranged from classifying just 10% of American households as middle class to including as much as 73%. What is going on here?

Perhaps the reason for this divergence of opinions is that, somewhere along the way, we forgot the reason for speaking or caring about a “middle class” in the first place. Why is the middle class an important category? If one digs back in history, one finds that the original reason was a political one, not an economic one. And this political dimension is what is missing from every one of the 12 quantitative definitions compiled in the Brookings report.

For most of history, writers have described political reality as an adversarial dichotomy. For the ancient Greeks it was democracy versus oligarchy. For Machiavelli it was the “humor of the people” versus that of “the great.” For Madison it was the factions of those with versus those without property. For Marx it was a class struggle between oppressors and oppressed. While these narratives may, with varying accuracy, capture the usual disposition of political society, the construct of a dichotomy glosses over the most remarkable exception to the rule: the emergence of an independent and energetic middle class.

The emergence of such a middle class is as historically rare as it is crucial to the history of democracy. Already Aristotle recognized that it is in those rare moments when a third class emerges besides the rich and the poor—a middle class— that a stable democracy or republic is possible. In other words, a middle class is not a standard feature of any state. It is a precious historical anomaly that enables democracies to exist and function. Wherever you see some semblance of democracy in history, there too you find an entrenched middle class that is financially independent and has at least a negative check—a veto—on the administration of government.

It is beyond the scope of this article to explain why exactly a middle class that satisfies these two criteria seems to be a necessary condition for the flourishing of a democracy or republic. I’ve written about this question before here and here. For now, it is worth noting that this is a point agreed upon by great thinkers from Aristotle and Euripides to John Adams and Tocqueville to recent scholars such as Steele Brand, Josiah Ober, and Ganesh Sitaraman.

The salient point here, which seems to have been forgotten by economists, is that the “middle class” is not an arbitrary economic or demographic construct. The middle class is an essential feature of every democracy because of its political agency. It is not enough that a middle class exist, or even that the middle class be substantial. The middle class must also be financially independent, since any constituency that depends on subsidies to survive does not have authentic political autonomy. Perhaps more importantly, dependence and debt weaken the citizenry’s negative check or “veto” on the administration of government. But such a veto is crucial. For democracy is not only based on the ability of the governed to give consent. It is also rooted in the power of the governed to withdraw consent.

In the democracies of ancient Greece, middling citizens could veto decisions through direct voting or by refusing to fight as citizen-soldiers. In the case of Rome, smallholder farmers were able to establish the Tribunate only after threatening to collectively withdraw their support from the state (a move known as the Secessions of the Plebs). American democracy was born when its middle class challenged its indispensable contribution—tax money—to the British crown. In all cases, the emergence of constitutional government reflects the power of a sizable segment of society to condition some indispensable fiscal or military contribution to the society upon a share in its administration.

Perhaps due to America’s extraordinary amount of luck, land, and competent leadership, its middle class has never been compelled to repeat a withdrawal of consent from its government like the one which gave birth to our country. However, for most of American history, there was a large section of the population that was financially independent and thus at least capable in theory of pulling off a “secession of the plebs,” should the government get out of line. The question is, how many of our citizens could make such a move today? This is not to encourage rebellion against the government. It is a thought experiment. If the majority of our citizens cannot conceivably take collective political action, do we even have a middle class anymore?

Which brings us back to the central question, how to define the American middle class. If we bear in mind the two criteria of individual financial independence and collective political agency, then all of the 12 definitions linked to above seem grossly inadequate. Almost half of them define the middle class as a fixed bracket between two percentiles of household income. For example, the IMF defines the middle class as the 10% of households that lie between the 40th and 50th percentiles of household income. The Brookings Institution itself, in a later post, settled on a broader definition: the middle 60% of households on the income distribution.

Some organizations offer definitions that are tethered to the median income. Such methods avoid the problem discussed above and may seem more promising. For example, Pew defines the middle class as those households that make between 67% and 200% of median income. But under that definition households earning just 46k a year are classified as middle class. Other similar definitions include households earning just 35k a year. It would be great if a household making 35k a year was able to be financially independent and have time to be politically active. But everyone knows that is not the case

If we are to have a meaningful debate about the plight of the middle class, how to save it, and hopefully also how to to grow and strengthen it, we need a definition that takes into account what the middle class is there for. It is there to make democracy possible and sustainable. A middle class is only really a middle class if it is independent and has political agency.

We invite other organizations and our readers to come up with better definitions that are historically-based and democratically-relevant. We are working on coming up with a simple and elegant definition ourselves. In the meantime, here are the principles we are basing our discussion on.

We understand the “middle class” to be:

FREE CITIZENS OF MODEST INCOME AND WEALTH, WHO ARE MEMBERS OF A POLITICAL COMMUNITY, WHO ARE INDUSTRIOUS AND INDEPENDENT, AND WHO COLLECTIVELY MAKE AN INDISPENSABLE CONTRIBUTION TO THAT COMMUNITY