On November 30, 2018, the Raleigh News & Observer ran an abridged version of the post below, entitled “It happened in Rome. It happened in Greece. Is it happening here?” (The title in the print version was “Anticipating the fate of democracy”.) The below post was shortened to accommodate the space permitted in the newspaper. This post provides the complete op-ed as originally submitted, with its original title.

One Word to Rule Them All
By Timothy R. Ferguson

English may presently be the global lingua franca, but political discourse is conducted in Greek and Latin terms. Politics, citizen, constitution, democracy, oligarchy, tyranny, monarchy, aristocracy, republic – virtually our entire political vocabulary derives from the Greeks and Romans. Millennia ago, the Ancient Greeks reduced the variations of political society to a set of archetypes based on a handful of key attributes. The political organization of every state arising since Antiquity can be described under their ancient classification scheme.

Our highest political aspirations are encompassed within the word ‘democracy.’ We do not want to live in an ‘oligarchy.’ We fear sliding towards ‘plutocracy.’ We despise ‘tyranny.’ We’ve adopted these archetypes into our political discourse. Our political reality and our political imagination are expressed through them. They are among the most powerful words in any language.

The adoption of Greek terms is not limited to the English-speaking peoples. Some variant of the word democracy exists in most languages that use an alphabetic writing system. Democracy is transliterated as demokratiya in Russian, dimuqratia in Arabic, and demokrasi in Malay, for example. Whatever language comprehends them, the Greek archetypes express similar hopes, fears, frustrations, and aspirations.

Ironically, the greatest of the Greek archetypes remains virtually unknown to those who otherwise express their political existence in Greek terms. The supreme political archetype is ‘Anacyclosis.’ Whether described as ‘the cycle of political revolution’ (W. R. Paton) or the ‘cycle of constitutional revolutions’ (E. Shuckburg) or ‘the cycle of the constitutions’ (A. Momigliano), the meaning is clear: Anacyclosis is the macro-level sequence of political change that binds together all the other Greek archetypes we’ve adopted. 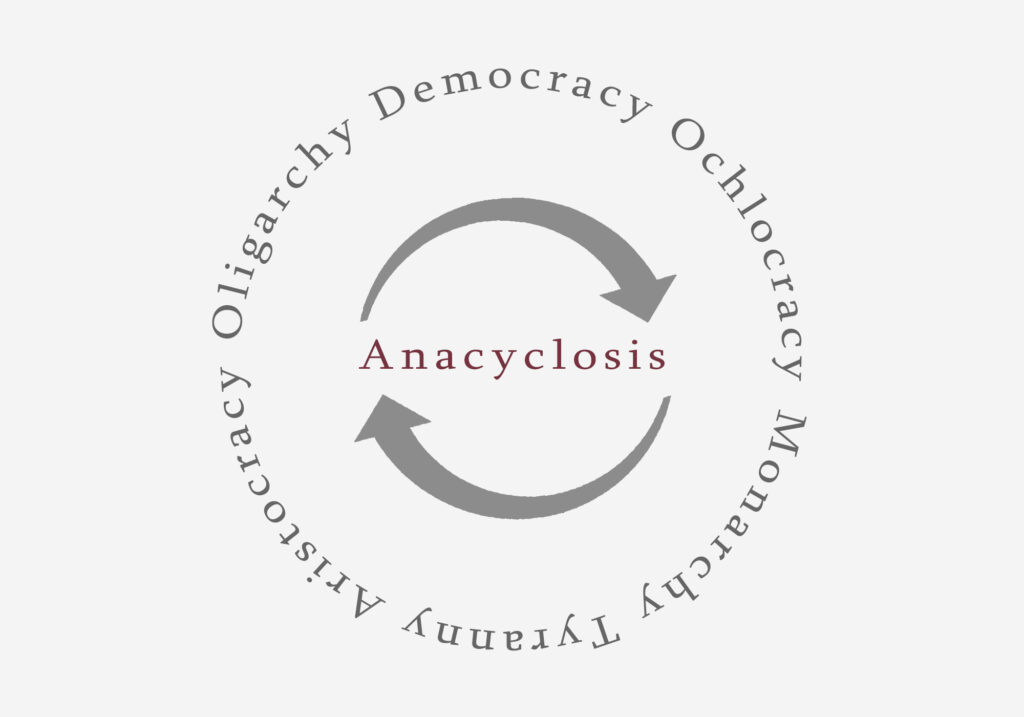 We’ve incorporated the words monarchy, tyranny, oligarchy, and democracy into our political vocabulary, as well as the meanings behind them, adapting them to our own experience. But we’ve failed to adopt the word and the idea that orders them together in their natural evolutionary sequence. By its Greek pedigree, Anacyclosis is the quintessential archetype of political evolution.

Anacyclosis is the culmination of Greco-Roman political thought, discovered during the culmination of Greco-Roman political development. It was most clearly articulated in ancient times by the Greek historian Polybius, writing about the Roman Republic’s meteoric rise to power. The generations after Polybius watched helplessly as the sequence he described played out in Rome, as it had done before in Greece, turning Rome from a democratic-plutocratic republic into a monarchy ruled by the emperors. And after Anacyclosis had run its course in the West, it took eighteen centuries for democracy to return.

If only the parallels ended there. But they don’t. Twice, the wealth and prosperity brought by democracy created men of “new money”; plutocracies of wealth. Twice, the plutocracies of leading cultures plundered citizens and foreigners alike, expanding their hegemony. Twice, the people fell into economic distress as wealth was concentrated and society was stratified. Twice, civil society was polarized as the middling virtues of moderation disintegrated alongside the middle classes.

Democracy in America is showing its age, stumbling toward the next step in political evolution: the contest of demagogues. A demagogue now presides over America. He will not be the last. He will not be the worst. It is long past time to reclaim from Antiquity the word that anticipates democracy’s fate, as it narrates the course of Western Civilization itself: Anacyclosis.