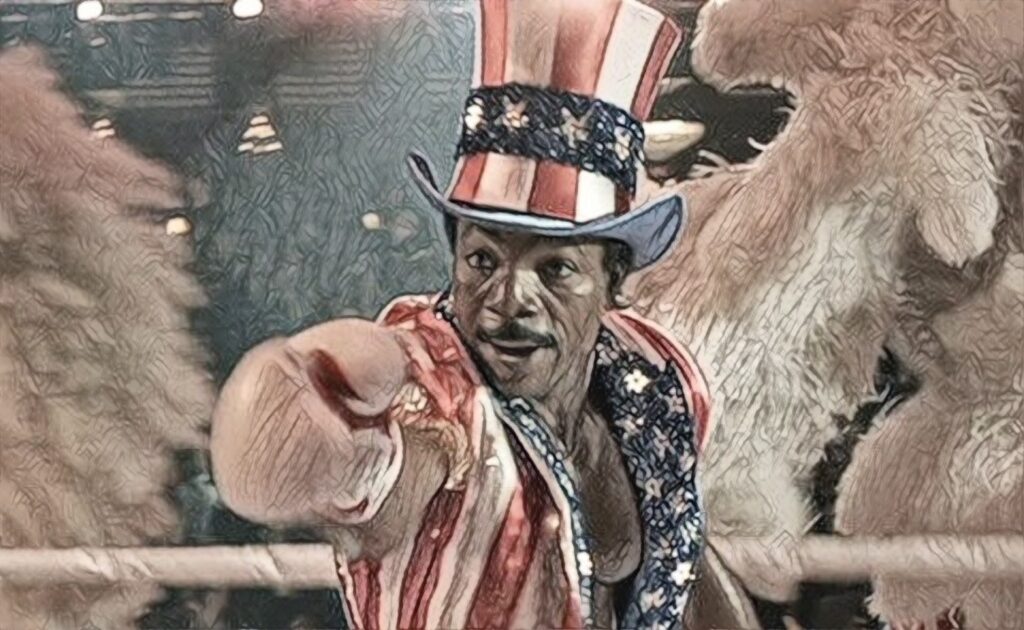 Ladies and Gentlemen. This will be the biggest political matchup since the fall of Rome:

In the red corner, weighing in at over 2,400 years old, with a record of more than 320 KOs, 0 TKOs, 0 split decisions, and 0 defeats, we have the Cycle of Civilization, the Destroyer of Republics, the Grim Reaper of Democracy, the undisputed champion of all political theory: Anacyclosis.

In the blue corner, weighing in at over 230 years old, 27 amendments, and 1 civil war, we have the oldest national written constitution in the world, ranking in legal significance alongside Hammurabi’s Code, the Twelve Tables, and Magna Carta: The Constitution of the United States.

This fight won’t even be close. When anacyclosis makes contact, it’ll be all over. Two hits: Anacyclosis hitting America and America hitting the floor.

True, America has shown some fancy footwork over the past couple of centuries. Democracy has dodged the first few blows, including the 1930s depression where half of the world went dictator. Thankfully, the Founding Fathers had studied anacyclosis and incorporated some safeguards against the cycle into the design of the Constitution. Most noteworthy are the separation of powers and the blending of democratic with non-democratic elements.

Polybius, Cicero, and other classical writers reasoned that, since all states naturally cycle through the simple constitutional forms of monarchy, aristocracy, and democracy, the best constitution should combine all three. They believed that counterbalancing the energies of monarchy, aristocracy, and democracy would prevent any one of them from predominating, thus halting anacyclosis. This strain of thought made its way to the American Founding Fathers – especially John Adams – who incorporated the principle of separation of powers into his 1780 Massachusetts state constitution (still in effect). This charter was referenced by the Framers at Philadelphia in 1787, along with John Adams’ explicit writings on Anacyclosis.

In furtherance of the separation of powers, the Founders designed the Constitution to limit the democratic element. Many modern writers, either being uninformed or misinformed about anacyclosis, have attacked the US Constitution on the basis that it isn’t democratic enough. The Framers of the Constitution fortunately enjoyed a much more nuanced and historically-informed understanding of democracy. They moderated democracy precisely because the lessons of Classical Antiquity taught them to fear democracy’s vulnerabilities to corruption, demagogy, and mob-rule.

The Philadelphia delegates believed that consent must derive from the governed. But they rejected direct democracy for the reasons experienced by the Greeks. They accordingly designed the Constitution to temper the popular energy within democracy. To the principle of democracy the Constitution originally gave this much: the people would directly choose those holding the power of the purse, would indirectly choose those holding the power of the sword, and would themselves be entrusted with neither.

For almost 250 years this design has remained intact, with only few amendments. American society has never yet degenerated into anarchy or mob rule. But will the Constitution protect America from the oncoming onslaught of anacyclosis?

Don’t bet on it. The longevity of America’s social stability cannot be attributed to political genius alone. Far more important, as anacyclosis counsels, America has been buttressed by a large and stable middle class.

Since ratification of the Constitution, three key factors have favored the middle class. The first was the sheer breadth of the middle class at the nation’s inception. The American revolution, unlike European revolutions, did not harness proletariat rage against the ancien regime. The American revolution was a struggle of merchants and farmers, not serfs and slaves. As Alexis de Tocqueville reported as the very first sentence of his 1831 work Democracy in America:

Among the novel objects that attracted my attention during my stay in the United States, nothing struck me more forcibly than the general equality of conditions.

Second, America’s population was widely diffused for most of its history. Abundant land and westward expansion forestalled concentration of landless paupers in our cities, thus deferring the transition from democracy into ochlocracy which normally accompanies urbanization in democratic states. America did not become majority urban until the First World War, and end-stage democracy does not visit upon rural farmers and suburban homeowners. Today, however, the United States is more than 80% urbanized.

Third, despite urbanization, foreign industrial destruction in the Second World War, particularly in Germany and Japan, created a superabundance of economic opportunity for American labor. It is a common anecdote that in the 50s and 60s, a person could quit GM in the morning and get hired by Ford in the afternoon.

In all of history, only two republics have established enduring world hegemony, a global pax: the Roman Republic and the United States. Roman victory in the Third Punic War subjected the Mediterranean world to Roman power, just as American victory in the Second World War subjected the free world to American power. Both states revered their constitutions. At no other time in history has understanding why the Roman Republic failed been so urgent. Why did anacyclosis catch up with Rome? Why did monarchy return to that 500-year old republic?

Monarchy returned to the Roman world because its leading men would not share the profits of empire with the loyal citizens who established Rome’s dominance in the first place. Starting fifty years ago, and now continuing under cover of Ronald Reagan’s globalist neoliberalism, the American plutocracy followed suit, by withholding a fair share of the fruits of American enterprise with American workers.

After achieving world hegemony, the leading men of both Rome and America made the world into their playground. They extended their networks into foreign territories. They developed closer ties with wealthy foreigners than with their own countrymen. They imported cheap goods. They exported domestic labor. Even worse, they eliminated free labor whenever they could. In both republics, they used slaves. Now in America they use robots and algorithms, gig workers, seasonal workers, and contract workers. Instead of harnessing their pecuniary genius for the common good, the most successful economic actors did all they could to reduce labor costs, increase profits, and concentrate wealth. In Rome wealth was concentrated in land; in America wealth is concentrated in securities.

Yet the plutocracy creates its own worst enemies when it cheats the middle class. Social stratification and economic precarity are delivering to populist demagogues an ever-increasing share of the hearts and minds of the American people. Once the middle class has been exhausted and the middling virtues eroded, revolutionary forces will dismantle all doctrines and institutions that hitherto sanctified the rights of property. It is not hard to imagine a future, not long far off, in which the Forbes 400 Rich List becomes the People’s Most Wanted List.

The rage and power of the mob resides in all people, in all nations. When unleashed, this power quickly descended into anarchy in 1381 in England and 1793 in France. It quickly hardened into autocracy in 1917 in Russia and 1933 in Germany. In Rome, it inaugurated a century of civil war which destroyed the republic. The mob rewarded Rome’s richest citizen by pouring molten gold down his throat. In America, the anger of the people is boiling, contained only by a rapidly aging middle class. A middle class whose diminution has been accelerated by Covid19. Clever tricks, deflection, and expatriation will only work for so long before the avaricious reap the whirlwind. Polybius described the end of the democracy chillingly:

When a new generation arises and the democracy falls into the hands of the grandchildren of its founders, they have become so accustomed to freedom and equality that they no longer value them, and begin to aim at pre-eminence; and it is chiefly those of ample fortune who fall into this error. So when they begin to lust for power and cannot attain it through themselves or their own good qualities, they ruin their estates, tempting and corrupting the people in every possible way.  And hence when by their foolish thirst for reputation they have created among the masses an appetite for gifts and the habit of receiving them, democracy in its turn is abolished and changes into a rule of force and violence.  For the people, having grown accustomed to feed at the expense of others and to depend for their livelihood on the property of others, as soon as they find a leader who is enterprising but is excluded from the houses of office by his penury, institute the rule of violence; and now uniting their forces massacre, banish, and plunder, until they degenerate again into perfect savages and find once more a master and monarch. (Polybius, 6.9.5-9)

When our middle class and middling virtues disintegrate beyond repair, and the accumulated wealth of generations is siphoned into the plutocracy, the fury of the mob will once again burst forth with terrible vengeance. Unless we save the middle class – and we’re pleased to see that our research has discovered how – its cries will be answered by ambitious demagogues who outwardly proclaim the majesty of the people’s democracy, but who outwardly lust for their own monarchy. In the end, anacyclosis will once again stand stoically above the corpse of another dead republic.

Notice: Image credit (the character “Apollo Creed” from the “Rocky” movie franchise) © Metro-Goldwyn-Mayer studios. Fair use under 17 USC 107 is claimed.

The link above in the paragraph above takes you to the Rationism project of the John Adams Institute. The Anacyclosis Institute does not formally endorse any contents on the Rationism website, but is pleased that its research has inspired a policy proposal.

Anacyclosis, Act 3: The Rise and Fall of Democracy

America is Scared of Democracy